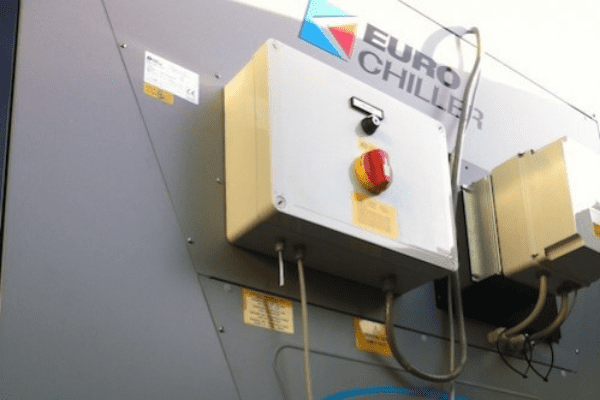 Process cooling specialist IsoCool has supplied an energy saving cooling solution to start-up injection moulder, Signal Plastic Components, resulting in a dramatic overnight saving of 90% on previous costs. Installed last September, IsoCool’s ADCOOLER adiabatic dry cooler – which was provided on a 12-month interest free loan – couldn’t have come at a better time for Signal Plastic Components, a company which is expanding rapidly after a successful first year in business.

Signal Plastic Components currently operate six presses at its factory in Washington, Tyne and Wear, where it manufactures plastic injection mouldings for a variety of industries. Historically, these machines were cooled to the required 20oC by a traditional refrigeration chiller, which was specified and installed by another cooling company. However, high energy costs quickly led managing director of Signal Plastic Components, Alan Franklin, to question the efficiency of the system.

“My expertise is in plastics manufacturing, not cooling, but even I could see that the running costs were too high,” he said. “I called in IsoCool after receiving a recommendation for their services and am really glad I did – they reviewed the set up and independently confirmed that we were poorly advised by our previous supplier on the type and positioning of the system.”

To maximise the efficiency of the cooling system, IsoCool proposed to replace the chiller with the ADCOOLER, an intelligent adiabatic dry cooler that switches automatically between dry and wet bulb operation according to the ambient temperature and humidity.

“Essentially, the ADCOOLER functions as an air blast cooler during low ambient conditions, providing up to 100% direct air cooling, and an adiabatic cooler when the ambient is higher than the set point temperature,” explained Nigel Hallett, managing director of IsoCool. “As a result it is far more efficient than a traditional chiller, which has a much higher installed power.”

According to Alan, the predicted savings on running costs provided reason enough to proceed with the replacement, but by no means the only one:

“I was very surprised at how reasonable IsoCool’s price was, and the energy savings made it a no-brainer – but what really impressed me was the service,” he added. “Nigel was incredibly supportive of us as a new business, taking into account cash flow and upfront costs. He gave us a 12-month interest-free loan on the ADCOOLER unit, which is great as the savings we make on running costs help to pay the loan back. We also required pipework, but rather than try to win the business for IsoCool, which he could have done, Nigel suggested that we use our in-house skills to build it. He even advised us on what to buy.”

Signal Plastic Components installed the ADCOOLER, a process which Alan described as “dead simple. It was literally a case of plugging it into the mains, connecting water, and switching it on. It worked first time and couldn’t have been more quick and easy.”

“As soon as we switched the ADCOOLER on our cooling costs went down by over 90%. And as long as the weather is below 20oC, which it is most of the time up north, we’ll be making huge savings. Even in summer our energy usage is going to be far lower as we’ll be running on the adiabatic system – it’s a win-win situation for us,” explained Alan.

“We’re saving over £500 a month on energy bills at the moment, which makes a big difference to a small, growing company,” he continued. “We’ve been able to invest back into the business, and thanks to being more cost-efficient, enjoyed a brilliant last quarter – we won some really big automotive contracts, moved to bigger premises and employed more staff. In fact we’ve already taken another free-standing chiller from IsoCool to work with a special application that requires mould cooling below 10oC. I really can’t see myself using any other cooling specialist now.”

Only too pleased to have been able to provide additional support to Signal Plastic Components, Nigel concluded: “Supplying an energy saving solutions is always rewarding, no matter what company we work with, but to see the impact that it can have on a young company is really exciting. We’re really delighted to be part of Signal Plastic Components’ story, and we look forward to seeing such a dedicated company grow.”