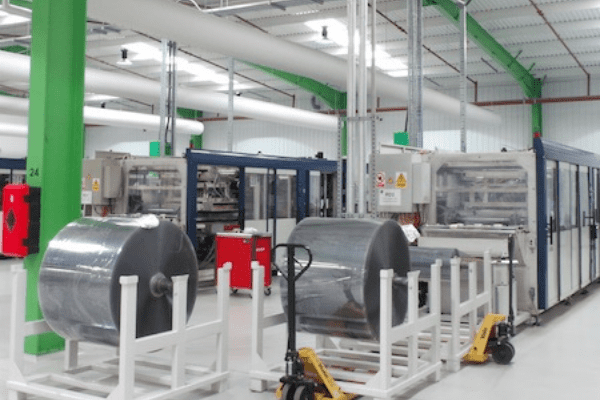 Serious savings are no pipe dream for Sharpak

Sharpak Aylesham first began production at its Aylesham plant in the 1960s, where it now manufactures a wide range of recycled PET food packaging products, including trays, punnets, assortment packs, and bakery tubs.

In order to maintain world-class manufacturing standards over the years, the plant’s thermoforming machinery and ancillary equipment has been continually updated with the latest technology. However, the supporting galvanised steel pipework for the compressed air and cooling systems had been largely modified rather than replaced, as the factory had expanded. This ageing infrastructure and the high potential for future issues such as corrosion and leakage were among the main reasons behind the company’s decision to relocate the plant to an adjacent facility. A new location for the thermoforming department meant new high-quality pipework.

At the company’s existing premises, around 11GW of energy was being consumed every year, of which 31% was required to run the compressors and chillers. Even the smallest leak or drop in air pressure would end up wasting considerable amounts of energy. Relocating the site was deemed a far more efficient solution than refurbishment, which would also create a better working environment for employees.

£1.5 million was invested into the relocation program, which saw a former warehouse turned into a high-tech, contemporary facility over a period of 3 months. One of the largest and most complex stages in the building’s development was the fabrication and installation of the pipework system for the compressed air and cooling systems. Having successfully worked with IsoCool on many previous projects, Sharpak Aylesham chose the Essex-based cooling experts for the task. Nigel Hallett, Managing Director of IsoCool, elaborated:

“The objective for Sharpak was to create an industry-leading production facility, which required all elements of the build and relocation to run perfectly. We have had a relationship with Sharpak for 11 years, and they have trust in our workmanship. They knew they could rely on us to deliver exactly what they wanted for the new production facility.”

IsoCool designed a bespoke turnkey solution for the new facility, which included a compressed air ring main, plus flow and return chilled water headers, both with high and low level valved outlets. The chilled water pipework was insulated with foil faced phenolic foam sections to reduce thermal losses. It was decided that some of the existing steel framework in the building would be used to support the new pipework in order to minimise the carbon footprint of the project.

To increase the longevity and efficiency of the pipework – and therefore the plant as a whole – IsoCool chose to fabricate the system in thin wall stainless steel tube, a material which avoids many of the problems associated with galvanised steel. Nigel explained:

“Rust and corrosion can cause problems in galvanised steel pipework, as it has to be cut and threaded. This process exposes the tube and accelerates the breakdown of the galvanised coating, causing it to peel off. This could potentially contaminate the whole system as well as cause damage to machinery. Sharpak also uses oil-free air in their compressed air system, and this is much more susceptible to corrosion than lubricated compressors. The result of any corrosion is a loss of pressure, which means the compressors have to work harder, wasting energy.”

Installation of the pipework went without a hitch, despite extremely demanding conditions on site. The timeframe was short, and the job list long, which meant IsoCool had to be flexible and work around several other contractors. Despite this, Sharpak reported that the process of transferring the machinery into the new facility passed off extremely smoothly.

Energy efficiency was a key driver behind the plant relocation program, and Sharpak Aylesham has closely monitored the site’s electricity consumption since moving. Even at this early stage, with such a significant proportion of electricity at the company’s previous site being used by the compressor and chilling systems, it’s easy to see the difference made by that the new pipework. According to Sharpak, the investment will result in energy savings of thousands of pounds, as well as deliver a reduction in maintenance and repair costs. Furthermore, the plant now has an infrastructure which is modern, efficient and suited perfectly to the highest manufacturing standards.